Below is the design for the tropical food forests planned to be established in the Royal Botanical Park in Kuantan, Malaysia.

The major earthworks on the site will be to set up the swales and potentially add some extra dams which could be straightforward aquatic systems for extra irrigation or fishpond dams.

The Earthwork systems needs to be well planted with plants from the nursery as soon as earthworks are established. This is because the fast weed growth in the tropical climate is going to need to something we are in front of from the start with plantings.

The Earthworks can be surveyed and marked while the nursery is being established. There will be a large amount of trees, plants and ground covers t plant in these systems as they are established.

The majority of the earthworks to be conducted are in the picking up of different water flows on contour with appropriately positioned swales.

Swales are water harvesting features consisting of a ditch dug on contour against the flow of water. The swale catches the water, pacifies its movement, spreads it along the contour and soaks it in the ground.

The act as tree planting systems, trees are planted above and below the swale and benefit from its intrinsic characteristic of soaking water in the soil down towards their root systems. Below are some illustrations from Brad Lancaster’s book Rain Water Harvesting for Dryland’s and Beyond illustrating a swale’s anatomy. 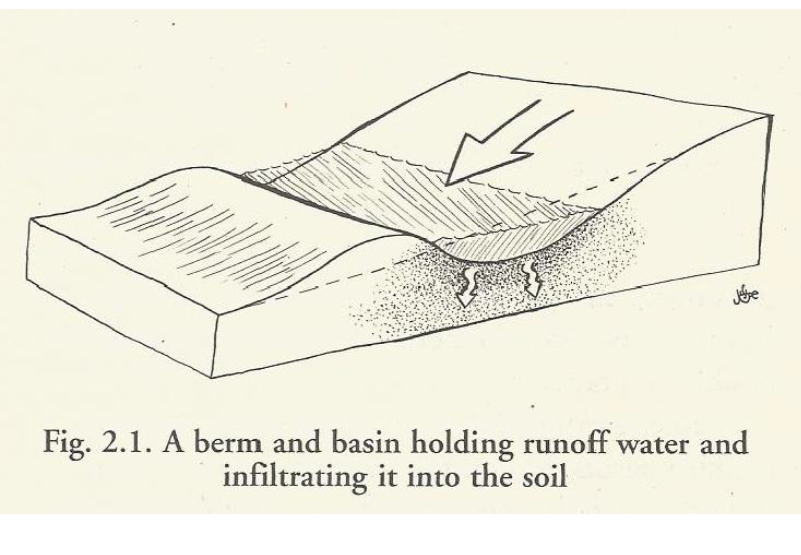 Swales could be connected to small dams and overflow passively when full to a determined level. Overflows (Level Sill Spillways) will be positioned and sized in a way that completely controls the erosive force of the spilled water and will direct water passively towards either a pond or a swale lower in the landscape, extending the time the water spends in the system and the distance it travels before leaving the site.

Earthmoving and swale construction is a timed strategy that needs to take in account the rainy season and its effects on the earthworks done. Timing the earthworks will be important to make sure we don’t result in damaged swales or ponds due to erosion and high rainfall.Since we mentioned earlier that swales are tree growing systems, they will be an integral part in diversifying the orchards section of the farm and lead to a healthier productive abundant ecosystems and that’s why all the swales will be planted with food forests.

Also known as forest garden, are a diverse collection of productive trees and plants modelled on the natural design and resilience of a nature’s primary ecosystem, the forest.

This well thought and designed ecosystem is a soil creative multidimensional multispecies tree system. With interactive diversity we design it to lead to fertility in the soil and abundance in productivity.

Below are some examples of what has been already established on the park.

Below are examples of different food forest assemblies that could potentially be planted along different sections of the swale systems. The assemblies contain 7 different layers, including Climbers in Blue Color stacked in a way that trees and shrubs will cover the whole space height wise and at the same time they are stacked in a way where they yield throughout the year, this means that we will always have something to harvest, eat, process and sell.

The assemblies also contain a number of Support Species in Green Color, these are species that function in different ways to help maintain the ecosystem and support its establishment. Some of the support species are fast growing legumes that function in the early years and some are long lasting and keep the ecosystem balanced and fertile throughout its existence.

Drawings done by one of our students Anas Suhaib, an architect who did the Permaculture Design Course with us and volunteered to do some beautiful graphic drawing for us.

If you would like to know more about the work we do please do get in touch.